ABC Trade & Investments (Pvt.) Ltd., Healthcare Division is in the water purification business for the past 5+ years with an installation base of over 3000 RO (Reverse Osmosis) water purification equipment capacity ranging from 75GPD Domestic units to community based RO plants and custom designed water purification solution to Government and private sector organizations.

We are one of the main suppliers of RO Plants to the National Water Supply & Drainage Board and many NGO and Social Service Communities coming forward to address the CKDu affected areas in Sri Lanka.

ABC Trade & Investments (Pvt) Ltd., was incorporated in 1997, is focused in the business area if ICT, Healthcare, Water Purification, Printing, Renewable energy, Lighting and is a recognized member of the Sri Lanka Computer Vendors Association and the National Chamber of Commerce of Sri Lanka.

Our relationship with some of the world’s reputed water purification equipment manufacturers and suppliers, Mitsubishi Chemicals Japan with Cleansui, Paragon - USA, Pure Aqua – USA, Vontron, Hydranautics, Acuro, Avista Technologies and with a dedicated team of professions can bring the best solutions.

Lack of safe drinking water is a major issue in modern world including Sri Lanka. Approximately 75% of the population of Sri Lanka lives in a rural environment with close association with immediate physical environment. The chemistry of the ground water must therefore, have an important bearing on the health of the population.

Geochemically the ground water in these areas in generally of the Na/K type with the Cl (Calcium) sub type predominating possibly due to the increasing drought conditions and salt build up. The total Dissolved Solids (TDS) and the electrical conductivity are also correspondingly high. A unique feature of the dry zone is that in a large number of areas, the fluoride levels in the ground water is higher than the recommended danger levels of the World Health Organization (WHO).

What is CKDu in Sri Lanka?

In Sri Lanka, chronic kidney disease of unknown aetiology (CKDu) has become a major health issue over the past two decades. This is a different form of kidney disease, which is NOT associated with conventional risk factors such as diabetes and hypertension. The root cause of CKDu has not been definitively established yet – hence it is referred to as ‘CKD unknown/uncertain aetiology’. Initially affecting several rural communities around North Central and Uva Provinces of Sri Lanka, CKDu is now prevalent in North Western, Eastern, Southern and Central provinces, and parts of the Northern Province of the island.

According to the World Health Organization, approximately 15% of the population in Anuradhapura, Polonnaruwa and Badulla Districts between the age group 15-70 years are affected by CKDu. Although majority of those affected are male paddy farmers and agricultural laborers, there are now a growing number of women and children being affected by CKDu. The WHO believes that this unknown CKD is an environmental-exposure disease caused by multiple factors such as chronic exposure to kidney damaging pesticides, arsenic, lead, cadmium, poor diet and genetic susceptibility to kidney failure. It is also in Nicaragua, El Salvador & even India. It is now being increasingly recognized as chronic agrochemical related Kidney disease.

Current scientific evidence in CKDu in NCP in Sri Lanka

NPC is the largest province in the country covering 16% of total country’s land area, 10,723 km2. NCP consists of two districts called Anuradhapura and Polonnaruwa. Anuradhapura is the largest district with area 7,128 km2. There are 3742 villages. The province has a total population of 1,259,567 in 2014. More than 65% of the population belongs to farming population and to low socio-economic group 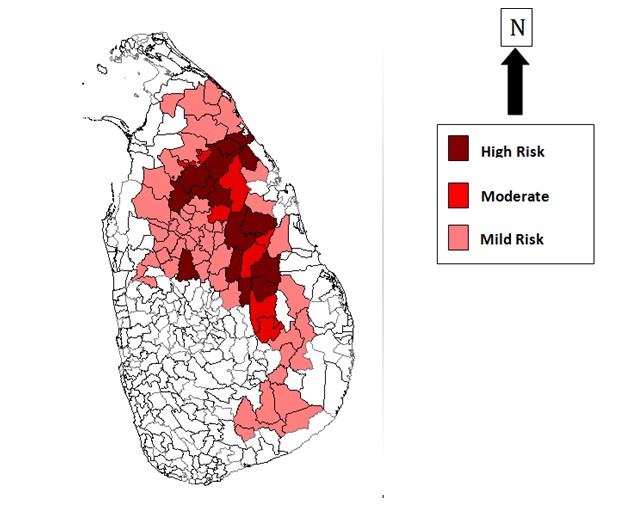