Geo Green Enviro Engineers is pioneer in providing turnkey solutions for the water & waste water treatments. Geo Green is engaged in fabrication, supply & services in the field of environmental products with high quality and standards to serve the client for the clean & green environment. Geo Green is based on futuristic vision & values such as integrity & trust which are the pillars of success. Also expertise in offering readymade Packaged Water Systems both in industrial & domestic requirements. Geo Green provides quality solutions with very competitive price and back up its technology with excellent after sales services.

MBBR is a highly effective biological treatment process based on a combination of conventional activated sludge process and biofilm media. The MBBR process utilizes floating High Capacity Microorganism Biochips media within the aeration and anoxic tanks. The microorganisms consume organic material. The media provides increased surface area for the biological microorganisms to attach and grow. The increased surface area reduces the footprint of the tanks required to treat the wastewater. The treatment process can be aerobic and/or anaerobic and operates at high volume loads. 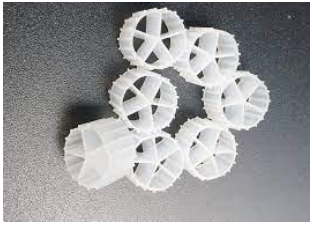 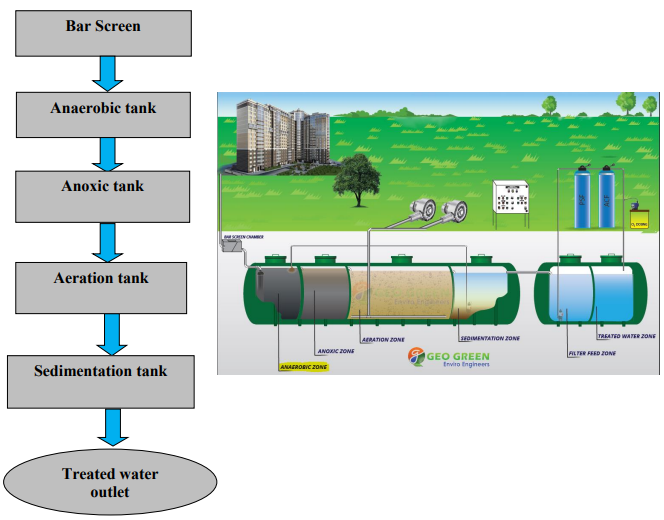 • The Influent enters the system through Bar Screen to isolate the foreign particles.

• Anaerobic Treatment Zone is the Oxygen depleted zone where in solids are settles down and the floating scum are floated in the zone.

• Water is separated from the sludge's are directed to next zone.

• Water with suspended particles enters the Anoxic Zone where the Pre Denitrification process takes place with the Recirculated Sludge from the Sedimentation Zone.

• Which results the lowering of BOD & COD levels before the Aeration (MBBR) Zone.

• Water from the Anoxic zone enters to the Aerobic (MBBR) Zone with low BOD & COD level.

• In Aerobic Zone the aerobic bacteria develop with the help of oxygen supplied by the blowers.

• BOD & COD level reduces to 55 60%. In this Zone MBBR Bio Media is introduced to increase the surface area for the better bacterial cultivation and to reduce the foot print of the system.

• Water from the Aerobic zone consists of bacterial culture enters the sedimentation Zone, wherein the culture is get settle down and the clear water passes to the Filter Feed Tank to get process in the Tertiary Treatment Zone.

• The Settled culture is redirected to the Anoxic Zone to perform the Pre Denitrification Process.

• BOD & COD Level reduced water get stored in the Filter Feed Tank. The Water with unsettled suspended particles are get removed by Pressure Sand Filter.

• Then the water get bleached & Odor removed by Activated Carbon Filter.

• Finally, the water is sanitized by dosing the liquid Sodium hypo chloride and ready for general purpose

GET A FREE QUOTE

Please fill this for and we'll get back to you as soon as possible!

TOP
Open chat
Hi
Aqua Science
Hello 👋
How can we help you ?